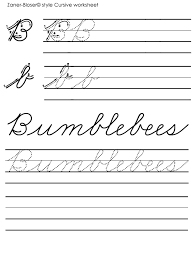 On February 13, 2017, House Bill 58 was introduced to amend section 3313.60 of the Revised Code to require instruction in cursive handwriting:

(9) Handwriting instruction in kindergarten through fifth grade to ensure that students develop the ability to print letters and words legibly by third grade and to create readable documents using legible cursive handwriting by the end of fifth grade.

From University of Washington’s Handwriting Engages the Mind:

The value of handwriting has been a topic of some debate in academic circles. The Common Core standards adopted in most states call for teaching children legible handwriting in kindergarten and first grade only, after which the focus is on keyboarding skills.

But several states, including California, Massachusetts, North Carolina and South Carolina, have recently moved to make cursive instruction mandatory. Some psychologists, neuroscientists and researchers including Berninger say there’s an important connection between handwriting and learning. Children taught to write learn to read earlier, generate ideas more easily and have a better ability to retain information, they say.

In a five-year study of Seattle children in grades one through five, Berninger found that printing, cursive writing and using a keyboard each use related but different brain functions — underscoring that writing is a complex undertaking that draws on many neurological processes.

“Handwriting requires the production of a letter form, stroke by stroke,” Berninger said in the CBS interview. “The act of producing something supports perception. So we need to output in order to improve our ability to process what we input from the environment.”

While the computer rules these days, there are crucial cognitive benefits that are lost when handwriting goes (Berninger, 2012; Zubrzycki, 2012). Forming letters by hand engages more networks (Berninger, 2012) within the brain than keyboarding. Children who learn letter formation learn to recognize letters more quickly (Berninger, 2013). Children generate ideas more easily when writing by hand (Berninger, 2012). Finally, it makes for better recall.

Placing cursive handwriting in the same category of skill as keyboarding is similar to categorizing flying a kite and a Boeing 747 as being synonymous. Cursive handwriting and keyboarding are not equal nor should they be viewed as interchangeable skills. Yes, keyboarding aptitude is necessary in today’s technology driven mode of interaction where children have more digital friends than neighborhood playmates who used to gather regularly to capture the flag or play ghosts in the graveyard. However, researchers in the nation’s top institutes have substantially documented how handwriting develops reading, writing, language and critical thinking. Keyboarding does not increase brain activation and impact performance across all academic areas as does handwriting.₄

When handwriting is properly taught, students are equipped to more efficiently perform the hierarchy of skills required in other subjects, and ultimately this leads to better grades, assessment scores, and overall academic performance.₁

From Psychology Today’s Why Writing By Hand Could Make You Smarter:

In children who had practiced self-generated printing by hand, the neural activity was far more enhanced and “adult-like” than in those who had simply looked at letters. The brain’s “reading circuit” of linked regions that are activated during reading was activated during hand writing, but not during typing. This lab has also demonstrated that writing letters in meaningful context, as opposed to just writing them as drawing objects, produced much more robust activation of many areas in both hemispheres.

From What’s Lost as Handwriting Fades:

Children not only learn to read more quickly when they first learn to write by hand, but they also remain better able to generate ideas and retain information. In other words, it’s not just what we write that matters — but how.

“When we write, a unique neural circuit is automatically activated,” said Stanislas Dehaene, a psychologist at the Collège de France in Paris. “There is a core recognition of the gesture in the written word, a sort of recognition by mental simulation in your brain.

“And it seems that this circuit is contributing in unique ways we didn’t realize,” he continued. “Learning is made easier.”